The Metro of Dubai has a station called „Dubai Mall“, about 900 meters away from the large shopping center in Dubai. There used to be buses between the metro and the shopping center, but for some years now there have been treadmills, roughly flat escalators, on which you can walk faster. 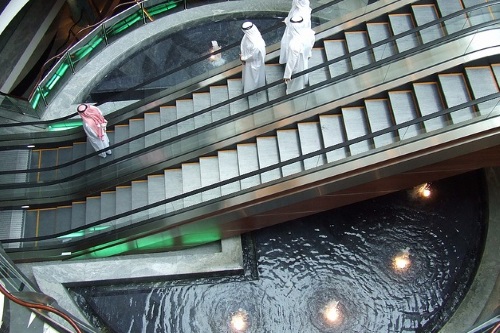 Right next to the Dubai Mall is the Burj Khalifa, currently the tallest building in the world at over 800 metres. The entrance for visitors of the viewing platforms on top of the skyscraper is directly in the Dubai Mall. The fastest elevator in the world takes you up. >>> Our page about the highest house in the world.

In front of the Dubai Mall there is a fountain show every evening for several hours. The Dubai Fountain is the largest fountain in the world, the fountains are up to 150 meters high.

For example, there is a large skating rink. Sometimes you can also watch ice hockey games here. There is also a huge cinema with over 20 projection rooms in the shopping centre in Dubai.

Almost all large chains are represented among the fast food restaurants, such as Mc Donalds, Burger King and KFC can be found in the Dubai Mall. We even saw a small branch of the German North Sea fish chain in the basement. You should also have a look at the „Rainforest Cafe“ with many tropical plants and so on. Of course there are also many normal restaurants, whether Asian, Pizza, French, everything imaginable there is.

The over 1,000 shops sell pretty much everything there is. A lot of shops in the Dubai Mall sell, as in all shopping malls in the world, fashion and shoes. Typical for Dubai and the Middle East, the Dubai Mall also has many shops selling jewellery and gold.

Of course, the Dubai Mall is completely equipped with air conditioning. Also the new entrance from the Metro is air-conditioned. Due to the size of the shopping centre, it is easy to get lost in the Dubai Mall. But there are many signposts in English language.

A quite new sight in the Dubai Mall is a waterfall over 20 meters high, in which human figures are suspended (see picture). 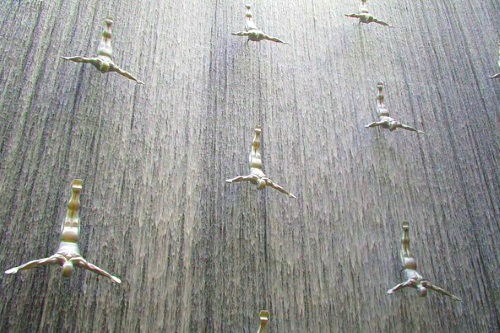 The Dubai Mall was built about 10 years ago. Opening was in 2008, later the shopping center was expanded to the current size of 1200 shops.