The luxury hotel Burj al Arab is something like the landmark of Dubai. It was opened in 1999. The hotel has a height of 321 meters and belongs to the top 5 of the highest hotels in the world.

The Burj al Arab is extremely luxurious. There are no simple rooms, only apartments (suites), none smaller than about 170 square meters. Larger apartments have up to 800 m². All apartments have at least 2 floors.

Of course there are also swimming pools, fitness clubs and the like. Such things usually happen twice, separately for men and women. Of course you can also go to the hotel’s own beach. On the upper floor there is a landing for a helicopter. Guests are also brought to the hotel by cars from the hotel such as Rolls Royce and German luxury brands.

The Hotel Burj al Arab has 6 restaurants as well as other catering establishments. Al Mahara is surrounded by huge aquariums. In the restaurant Al Muntaha in more than 200 meters height one has a great view of Dubai City and the sea. 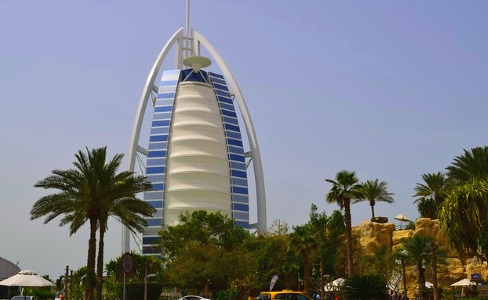 Of course you can simply rent one of the apartments in the luxury hotel of Dubai. Another possibility is to eat at the hotel. You can book this in advance on the German website Getyourguide. There is both the option dinner and lunch. With 200 euro per person inclusive beverages one must count however. But it is an experience you will remember for the rest of your life. Staying overnight in Burj al Arab Dubai costs many times as much.

Next to the Burj al Arab is a large water park (theme park) called Wild Wadi Waterpark. Also the newest architecture project „The World“ can be seen from the upper floors of the Burj al Arab. The luxury hostel is about 8 kilometers south of the shopping center Dubai Mall and the highest building in the world Burj Khalifa. The subway stop „First Abu Shabi Bank“ is about 1.5 km away. The famous beach „Jumeirah Beach“ is almost next to the artificial island on which the 7-star hotel stands.

The shape of the hotel is reminiscent of a sail. Translated, the name „Burj al Arab“ means „Arab Tower“. The artificial island of the hotel is connected to the country. The marble of the facade of the hotel comes from Carrara in Tuscany. Inside the hotel large quantities of gold leaf were used.

We think that the Burj al Arab is still one of the big sights in Dubai. It is definitely one of the best hotels in the world.